Some fun and interesting things happened in the past week.

I met Karen B for lunch.

I finaled in two writing contests.

I dug rubber bands out of Five's ear canal.

Two of those three things are social media related.

I met Karen through a blog written by Lucy March, who is the alter-ego of Lani Diane Rich. Lucy spent a year posting about her life after divorce and a whole lot of creative, funny, kind, smart women followed along. That community became known as The Betties. I was Five Boy Betty, the precursor to The Lone Woman.

Have I lost you yet? Hang in there, it gets better.

Other notable women of the Bettyverse included Julie, Delia, Lora, Kate, Deborah, Skye, Robena, ...really, almost everyone who comments on this blog because they followed me from there. And I followed them to their blogs, onto Facebook, and now Twitter. With each passing mile on the social media highway I've met new people, formed new friendships, and deepened others.

My mother used to complain that the boys always had their noses in their phones, clicking away instead of socializing. She worried that technology was isolating. I told her it was simply evolution. When I was a teenager, I could get on the kitchen phone--so named because it was attached to the kitchen wall--conference call two friends, then drag the cord all the way to the bottom of the cellar steps to sit and talk for hours.

To me, the Internet is just one giant party-line, and for my children who struggle socially, it's often their only invitation to the shindig. One has friends he talks to every day on Twitter. He has never had that in "real" life. When I explained that to my mom, it eased her mind.

One may never meet his internet friends in person, just as I will never meet all the Betties. But I have spent time with some, shared hotel rooms with others, and even gone to a Yankee game with Kris when she was visiting from Australia! But the beauty of social media is that the lack of physical contact doesn't diminish the power of the relationship. Friendships ebb and flow as people enter and exit the highway, but the world doesn't narrow, it expands.

This week I met a whole slew of ranchers and farmers on Twitter. I stumbled across a story about a blizzard that devastated South Dakota ranchers, killing upwards of 70,000 cattle and sheep, ruining countless lives. I had heard no mention of the storm in the mainstream media, unlike the intense coverage New Jersey received after Hurricane Sandy. I wanted to help the ranchers in the same way so many people across the nation had done for us, so I started tweeting about it. Each day I met more ranchers, bloggers, and writers, from Oregon, to Santa Fe, and even New York. And though I may never stand on their land, my life is better from knowing them.

I started writing because I read a Jennifer Crusie novel and wanted to do that. I've continued writing because all of you have encouraged me, held my hand when I've struggled, offered love during my darkest moments, propped me up when I've fallen. For that, I am eternally grateful to this force that harnesses hope and kindness, spreads it around the world, and creates lasting friendships from the ether.

Two is competing for Mr. MK tonight. It's a male, high school version of the Miss America pageant, but it raises money for charity. For the talent portion of the show he will be recreating the Miley Cyrus VMA performance. Because all of my children like to wait until the verrrryyyy last minute to prepare, last night we were scouring the house for a foam finger and his tuxedo.

Yes. There is a formal wear portion of the competition. And swimwear. Or do we call that "health and fitness" now?

This morning, Two texted me to say he needed a ballot box. Just a shoebox or something. You know, decorated. This reminded me of Death by Diorama, our last foray into spontaneous crafting. But I'm also going to share my most epic craft failure again, because we could all use a laugh, right?

BAD PUPPET: the story of one young man's heartbreaking struggle to bring the joy of reading to life through art. Unable to forge the creation himself, he must overcome language barriers to gather the necessary materials and direct a disabled seamstress in a race against time.


"BAD PUPPET captures the universal struggle all artists face in bringing their creations to life. Not for the faint of heart, but necessary reading for anyone who has ever lost their muse while on deadline."

Sadly, BAD PUPPET is not fiction. It's the true tale of Five, a project, and procrastination. The usual suspects.

At the beginning of April, Five came home with instructions for his book report, which was due April 30. I had to read the sheet, sign it, and help Five choose his complementary project, because it's not enough work for the eight year-olds to just write a report. He chose to make a puppet of the main character. I signed the paper and promptly lost it. A week later we had to ask the teacher for another one, because he was the only kid in his class who hadn't already started reading for the report! This didn't alarm me, because April 30 was weeks away. His report wasn't even a blip on the outer ring of my priority radar.

Five read Henry and Mudge and Annie's Good Move in one sitting at the kitchen table. On April 14 he reminded me that the rough draft was due  April 18, and we hadn't even started it! On April 15, he sat at the kitchen table and wrote the rough draft. He handed it in to his teacher on the due date, and I put his final copy out of my mind because April 30 was still really far away.

In the meantime, I helped Four with his book report project which was due April 20. This month, he created a "Book in a Bag," by putting visual representations of the characters and important plot points in a container of some sort. We chose a computer bag, because the main character was trying to win the computer prize at the science fair. Clip, clip, clip, throw in some science stuff, done.

On April 24, I realized I was leaving at the end of the week to attend the New England Conference. There was no fucking way Five and I were going to get that project done before I left. I was still shopping at that point for an outfit to wear to my interview, which absolutely took preference over a puppet.

How hard can it be, anyway? I thought. It's a paper bag and some markers. Pish.

I mentally slotted Sunday as the day to type the final draft and create the puppet. Five and I made the necessary revisions to his draft, although there was one sticky situation. ("Dear Ms. Teacher: I believe present tense is correct in this paragraph.") We'll see how that turns out for us. After dinner, I made my paper bag prototypes, cutting out the shapes to see if they would fit Five's hand.

"Mom, Thomas made Mudge out of a sock and an old washcloth for ears, which looked surprisingly realistic. Then he stuffed it, put it on a stick, and used that as his puppet. I want to do something like that. Something creative."

It was Sunday night. I considered my options. I could not run to the craft store to purchase felt, my preferred medium. I didn't have any rods to use as mounting sticks, no yarn for hair, no googly eyes. Nothing. What I did have was an old cotton t-shirt, some stuffing from another "Make Your Own Whatever" kit, and my sewing machine, which has been in my mother's possession for so long I've forgotten how to make the needle go in reverse.

I got to work.

When I was done sewing, I had a square-headed, long-legged, understuffed, armless cotton sack, which became half beanie-baby when we filled the legs with barley. I told Five we'd add the arms later. I gave him a marker and told him to draw eyes and a mouth. He started to cry.

"This is horrible! This is the worst puppet ever! It doesn't look anything like Henry. You just want to color everything in. I can't show this to my class. It's embarassing. You stink at crafts!"

At that point, Three walked through the kitchen, looked at the maimed beanie puppet and said, "Where are its arms?" I glared and asked if he was being helpful, to which he replied, "Uh... I like its mouth. It's very Joker-ish."

The Captain called for him from the living room and tried all his best moves, reminding him he'd get a good grade just for trying. But Five just kept saying, "You have to see it, Dad. It's horrible. If you saw it, you'd understand."

He was right. It was spectacular in its deformity, unparalleled in its ugliness, epic in its failure. 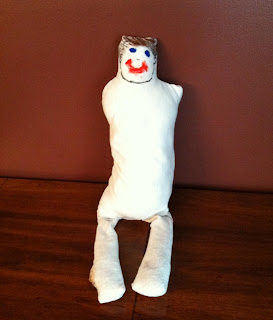 We made a poster instead.

The next day, Five got off the bus and told me the morning had been terrible.

"One of the phonics words was 'puppet,' and it brought back all the bad memories of that square-headed puppet, Mom. I wish we weren't so bad at crafts. "

Ahhh, good times. Good times. Now I'm off to make magic with a waffle box, foamcore, and some sticky stars. Wish me luck.