When Can I Mothball This Cape, Exactly?

I am a powerful woman. I know this because I have not yet snapped, crumbled, or otherwise yielded to an almost continuous assault of stress-inducing events. My heart might soon explode, but I'll be standing when it does.

I drove Five to the emergency room Friday afternoon.  His anxiety level had been climbing steadily and getting him into school had become a Herculean task. This became especially true Friday morning when the anxiety turned into panic as I tried to wrestle him into his coat. When my children are in the grip of a panic attack they become like the Hulk writ small. Bodies cannot be made to yield, and threats of physical violence against me are common.

I didn't force Five to go to school; instead, we drove to see Four perform in his talent show. Five brought his lunch box because he was hungry, and I thought he would eat on the way. When we got to the school he wanted to bring it inside but I told him he could not. This wasn't the answer he wanted, so he complained all the way up to the auditorium and during the performances.

Rational thought isn't Five's strong suit on a good day (see any "How I Failed Five" entry for corroboration), but the anxiety stomps it out of existence. By the time we got in the car to leave he had swung completely in the opposite direction and was now wracked with guilt over his behavior, crying that he was a bad person and just wanted to die. He wanted me to open the car door so he could throw himself into traffic, or give him something sharp so he could stab himself.

I made it into town and turned toward the hospital. I just wanted them to give him something that would calm him down--I would have consented to a lobotomy at that point if I thought it would save him. The ER staff was kind, but they referred us to the folks across the hall in the Behavioral Health unit. After basically pushing Five through their doors, he settled down when they asked if he wanted lunch. After all that arguing about the lunch box he still hadn't eaten, so I guess that was the magic bullet.

Turns out no one will administer drugs to a nine year-old unless he is admitted to the hospital and that wasn't the route we wanted to take. I called my psychiatrist, who we had just seen on Wednesday, and told him it was time to try something new. He prescribed the same medication that Three and Four take for their anxiety, but it will take at least two weeks for it to really start working.

The Captain and I have been down this road before and we're confident Five will be okay, because Three is our success story. But, holy shit, it's an exhausting journey. It requires stamina and a singular focus, which is a difficult thing when there are four other children who need to get to school, baseball, basketball, track, choir, SAT class, work, and now, intensive therapy. It means I must plan each day like Five won't go to school, and even if he does, I must be close enough to get him in case he has a meltdown. The Captain, Two, and I were supposed to go on a college tour this Wednesday, but that's no longer feasible. I had to cancel my reservation at the New England Romance Writers conference because I don't want to be that far away, and frankly, I haven't been able to get any book work done anyway. My life is, once again, in a holding pattern.

There's a saying that God doesn't give you more than you can handle. I want to thank God for his supreme confidence in me, but I need to clarify a point. Just because it looks like I'm handling my mother's death, it doesn't mean I'm ready for a new crisis. Feel free to lighten my load, dude.

When you write, do you struggle to find the right words to convey your meaning? Do you routinely type there when you really mean their? Are you also, like a certain someone, who shall remain nameless, but who is lone and a woman, comma happy? Have you stared at the computer for so long that the words have lost all meaning?

Nan is a freelance copy editor and proofreader. She's been practicing her craft for almost thirty years, first as a writer and magazine editor, before starting her own business in 1996. One of Nan's first freelance projects was proofreading Law for Dummies, making our rights (and perhaps torts and contracts) more easily understood. She still works on the For Dummies books, so I want to personally thank her for helping Two pass Chemistry!

Most of Nan's clients are publishing houses or editorial services companies, and she works primarily on computer books and college textbooks. But the beauty of being self-employed means she has flexibility to accept her own clients and make her own hours. Because her work is computer based, I should anyone can utilize her expertise!

Nan's greatest satisfaction comes in making writers sound as smart as we truly are because she is also an author! She recently published her first romance novel, RULE NUMBER ONE, and is working on three others. It is this work ethic that makes me want to be her, or at least hire her to help me sell my own novel.

If you would like to take advantage of Nan's mad skillz editorial services, please contact her at nanreinhardt.com. If you want to see if the proof is in the pudding, shoot on over to Amazon and order her book. In the meantime, gaze upon Nan in her newest role: Grandma. Now trust that Nan can make you as happy as that adorable, young lad. Even if the hat doesn't work as well on you. 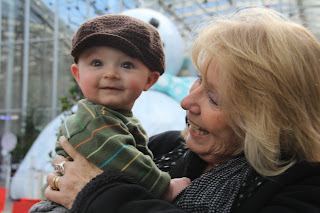 Thank you, Nan, for participating in Working Woman Wednesday! Tune in next month when we'll feature another fabulous friend waiting to make your life easier. The Lone Woman will return to her regularly scheduled diary entries next week, although I can't guarantee the same result.